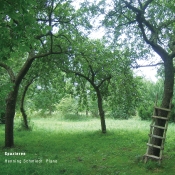 Wintertime in Germany is long and dark. Everyone longs for signs of spring, its first pale light and warmer winds which begin to triumph over the darkness and melancholy.

This feeling of anticipation and hope is present throughout the twenty-nine miniatures and songs of Spazieren. And when the evening bell of the old village church calls the wanderer back to his home, it was perhaps not only a trip, but also a journey into the past and into dreams not yet dreamt.

Spazieren is the 3rd solo piano album by Henning Schmiedt released by the label flau. It is a collection of delicate, simple, solo piano short-stories.

This CD was recorded in Berlin last winter for a release in Japan in early spring. The launch was postponed after the massive earthquake that occurred in eastern Japan in March. In memory of the victims, Henning recorded and dedicated a new piece Libelle stille Andacht 11.3.2011